(Continued from Part 1: Wildflower Safari.)
Ok, so I left off at Highway 58 heading West, soon after leaving Highway 33. We continued on Highway 58 as it ascends into the tall, rolling hills and through the fields of Fiddleneck (as seen as the last photo in the previous post). This road snakes through farmland and an occasional lone oil drill. 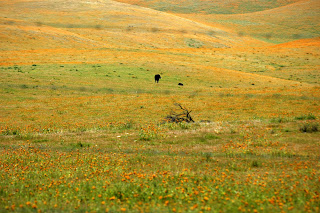 A farm and lone cow
As you continue up into the hills, you will notice the San Joaquin Valley, flatten behind you. 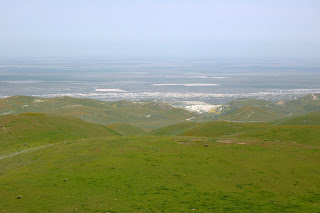 A view of the San Joaquin Valley from Highway 58
There will be many places through the hills and valley to pull off. Some of our stops were for wildflowers and some were for the amazing vistas. The Oak trees along this road do not seem to have any leaves like the did along Highway 46 (I would like to know why). They were still pretty bare, maybe they are a different type of Oak. There will continue to be many amazingly tall, rolling hills with wildflowers. 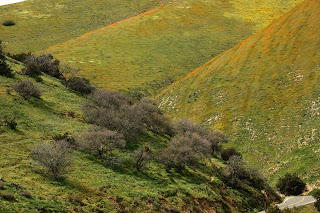 Beautiful Hills and Bare Trees
The road begins to descend as we got closer to the Carrizo Plain. It was full of green and yellow. 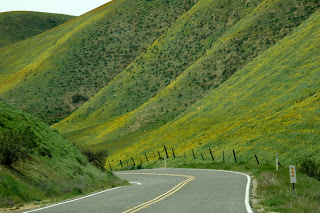 Descending down Highway 58
Near the end of the descent we spotted amazingly yellow hills thick with wildflowers. I had to stop and get some photos. I could not believe my eyes, there were so many flowers! 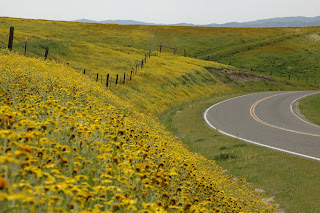 An amazing thick patch of flowers
We rounded the bend and thought we saw the turnoff for Carrizo Plain National Monumnet, as they described on their website. It turned out to be the wrong road (although we discovered later it would still have taken us there but they probably don't recommend it because it is a dirt road.), Seven Mile Road. We were treated to a view of the amazing Carrizo Plain (although this land is not part of the National Monument). It reminded me more of Montana than California. 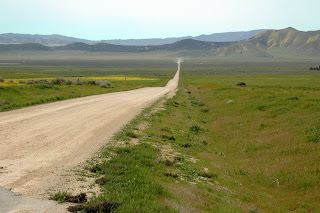 The first view of the Carrizo Plain
Although we wanted to continue on this road, it was clearly not following the directions (next time we WILL take this road instead, although the way the park suggests is also not to be missed). We turned back to Highway 58 and continued west, luckily there was mountain after mountain of golden hills. 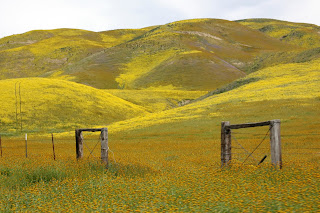 Golden Hills while looking for our turn off
The road continued on, long, like a stretching cat. Finally, we found the left-hand turn for Soda Lake Road. This is a beautiful road and not to be missed. 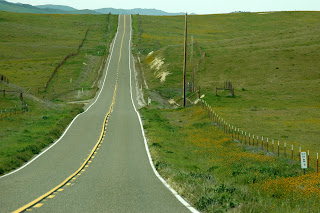 The Cat-stretch road
We traveled through flat land, as this was now part of the Plain, but the pastures were heavily sprinkled with a variety of wildflowers. The ones that struck us the most were the little powdery blue ones. 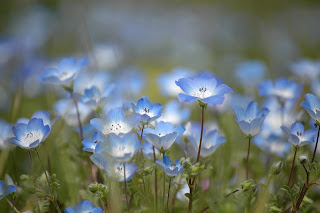 Our favorite: blue flowers
While stopped at this meadow/pasture a huge bird flew low overhead. It was a surprise cool-factor in the trip. I don't know what kind of bird it is, but I feel like I should know. 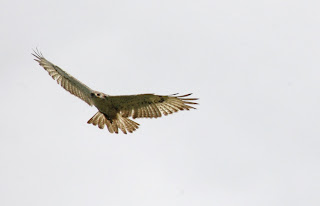 Unidentified Bird
We continue on into the entrance of the park. The park, being a national monument and managed by the Bureau of Land Management has a podcast that I downloaded with history, audio tour and other information about the park. (Download Carrizo Plain podcast) We passed the Soda Lake parking lot and instead drove up to the Soda Lake Overlook. 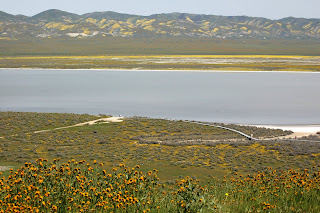 View from the Overlook
There we had a picnic lunch and admired the beauty and vastness of the Plain. When we had finished we walked the rest of the way up to the Overlook. Soda Lake is a salt water lake (I think) that, when it has water, is a resting stop for migratory birds. We did see some birds, while driving, with long, extremely thin beaks. Beyond the Soda Lake is a vibrant field of gold flowers bordered by the hills painted with more gold flowers. I have never seen anything like this in my life! Looking north, the park continues for many, many miles. 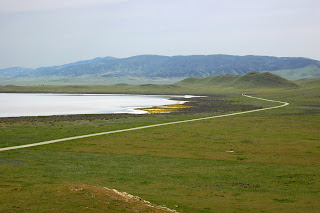 The park road continues along Soda Lake
Along the Overlook path was a patch of gold flowers, I couldn't help myself but to snap several photos. Also, looking down the hills was a nice carpet of the same powdery blue flowers. We continued on the park road along Soda Lake enjoying the green hills and the fields of flowers. Eventually, I stopped at one particularly thick field. 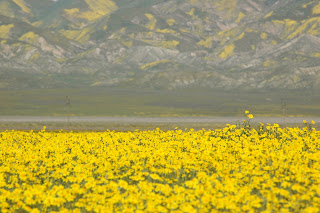 A thick field of Yellow
Of course, I had to try to capture the thickness in action, since I had never seen wildflowers this dense before. 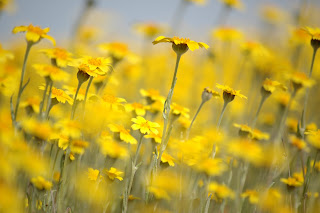 Close-up of the dense, field of flowers
Eventually, we sadly had to move on, we still had a lot of driving ahead of us to get to Lone Pine. We continued back out of the park and this time we took Seven Mile Road back out to Highway 58. 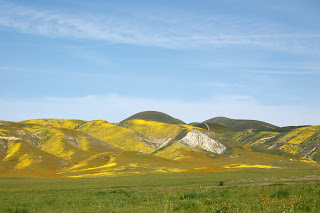 A view, leaving the national monument 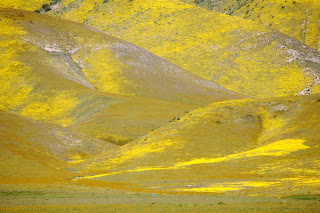 I can't get enough of these Golden Hills!
Seven Mile Road had interesting road signs for other "roads" that did not seem to exist. But they were properly labeled with the usual green street sign. Sometimes there would be a faded patch in the pasture where it looked like a road might have once been. This is some of the most intriguing countryside I have ever been too.
Back out on Highway 58, heading east, we made our way down, down, down towards McKittrick. Of course, the light is different than when we drove through the first time and we are facing a different direction, so much of our scenery is slightly different. I knew we would hit Bakersfield soon and the end of the vast amounts of wildflowers would end, so I tried to soak up as much as I could. 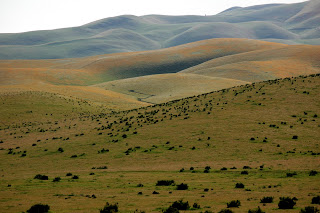 Last Look at Hills of Wildflowers
We took Highway 58 right into Bakersfield where we eventually met up with Highway 178. Paul had heard Bakersfield had good Mexican food so we began a search for a taqueria that was still open at this hour (about 4pm on a Saturday). Eventually, after making several stops and asking around we found a random place. I had fish tacos (they were ok). Paul's burrito was really good. What was freaking amazing, was the Mexican coconut popsicle we bought. It was heavenly, creamy and luscious.

Normally, when we head through Bakersfield to points east (Death Valley, Las Vegas, Lone Pine) we take Highway 58 but I had heard some good things about wildflowers around Kernville, off of Highway 178 and I was determined to check it out. Sadly, the sun was going down, so I was sure there would not be enough light, but I still wanted to try the this new route to the east side of these mountains. The San Joaquin Valley was at our backs as we swooped up HIghway 178 directly toward the mountains. I was not sure how we were getting through these mountains. The road followed along a river into a narrow canyon. We were walled in by enormous green, rocky, steep mountainsides on both sides. I couldn't believe it. It was so beautiful I just couldn't believe we had never traveled this road before. 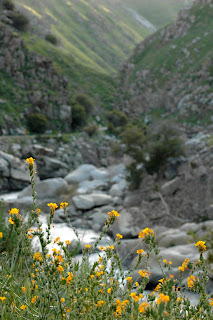 A Stop Along Highway 178
The road widened a bit and got closer to the river, which I looked up on a map and discovered was the Kern River. There were tufts of wildflowers growing along the sides. 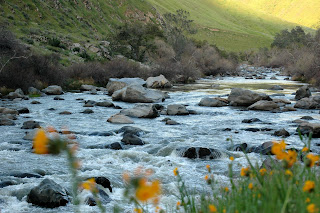 The Kern River
The road continued up into the mountains, leaving the river, as it got further and further below us. It is all part of the Sequoia National Forest, along its southern boundary. It got too dark for pictures, especially with the mountains prematurely blocking the dipping sun, so I just enjoyed the darkening scenery. After a while we finally reached Lake Isabella and we turned off at Highway 155 to get a closer look. We followed along the lake to a pull off. 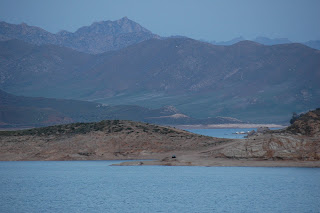 Lake Isabella
After taking a look we went back to Highway 178 and continued east through the many small, mountain lake towns. There were a lot of RVs pulled right up to water's edge. As we continued it got completely dark and we could not enjoy the scenery. We descended down and eventually hit Highway 14 and then 395 north toward Lone Pine. We reached Lone Pine at 9pm and checked into the Comfort Inn - Lone Pine. This is a pretty nice place and there was no vacancy on this Saturday night. Next stop, Part 3 - Death Valley.

The Details:
Photographs:  To see more of my photographs of this portion of the trip, visit:
Carrizo Plain National Monument
All rights reserved.

Carrizo Plain National Monument: is something like 50 miles east of San Luis Obispo and 55 miles west of Bakersfield, about 7.6 miles along Soda Lake Road from Highway 58. The park recommends following their directions, as Google Maps and GPS devices have led people astray.


Route:
From Highway 58 heading west, soon after it leaves Highway 33:
1.Continue east on Highway 58 about 14 miles (according to the Carrizo Plain National Monument directions, it felt longer than that to me.)
2. Turn Left on Soda Lake Road and continue for 7.6 miles to the boundary of the Carrizo Plain National Monument park.
3. Explore along Soda Lake Road, including the Soda Lake Overlook (on your right, you can't miss it, the road to the overlook is across from the Soda Lake parking).
4. Continue back the way you came on Soda Lake Road and turn right on Seven Mile Road.
5. At the end of Seven Mile Road, go right onto Highway 58, heading west.
6. Follow Highway 58 for about 55 miles into Bakersfield. Watch the road signs carefully because 58 makes many turns. You will cross over the I-5 interchange.
7. Around the Highway 99 Interchange, watch for and follow signs for Highway 178 East.
8. Follow 178 through Bakersfield and then into the Kern Valley along the Kern River, about 45 miles.
9. Optional: Take Highway 155, exit 43 for Wofford Heights, towards the Lake Isabella Visitors Center and enjoy the views of the lake.
10. Take 155 back to 178 and continue east, about 43 miles.
11. At the end of the road, make a Left onto Highway 14 North and follow for about 7 miles.
12. Continue onto US-395 North for 63 miles to Lone Pine. (The Comfort Inn is about a mile before town on the right).

Map:
This map may not be completely accurate, because of the exact location of Soda Lake Road.