I live in San Francisco and all around me are interesting and beautiful things. It is possible to never be bored and not even leave the city, but I love the wild, open outdoors, which you don't get in the city (Golden Gate Park and the Presidio just don't cut it for me). It is the end of March and today it is raining, which is certainly typical. But on Saturday, that was not the case. I had checked the weather report and the wildflower report and it seemed like the conditions were going to be perfect to visit Point Reyes National Seashore. I have never been to Point Reyes National Seashore and I really can't figure out why, other than I seldom adventure north of the city (I can't really figure that out either).

Point Reyes National Seashore is the headlands or peninsula about 30 miles north of San Francisco. When you first cross the Golden Gate bridge you have the Marin Headlands and the Golden Gate National Recreation Area. North and west of this is Point Reyes. This strip of land has the ocean on the west and Tomales Bay to the east, although the bay does not run the entire length of the park. If you take Highway 1 up the California Coast, you will miss Point Reyes, since it is actually further west. Native Americans used to live here (Miwok Indians) and seemed to have many well established settlements. Sir Francis Drake landed here in 1579 and was the first European explorer. Over time, many ranches were set up, some of which still remain today. The cattle were often raised for their hides, so they were skinned out in the fields and the carcasses were left behind, which attracted bears. There used to be a very large bear populations, which is probably why so many places have the word bear in their names.

I started out of town around 10am. I got over the Golden Gate bridge, drove north and found the Sir Francis Drake Boulevard exit. This road led me through many small suburban town of Marin County. It lead up into the hills and then down through a redwood forest. Eventually, I ended up in Olancha, where I was going to visit the visitor's center. There were a lot of cars parked at the visitor's center and I thought it was going to be crazy, but it wasn't so bad. The ranger gave me a map and a hiking trail map and gave me information about wildflowers. I left and went back out onto Sir Francis Drake Boulevard. I followed this to Drakes Beach and the Kenneth Patrick Visitor Center. On weekends in the winter, you are not allowed to drive past this point on Sir Francis Drake Boulevard (too much traffic for this narrow, windy road), so you must buy a ticket for the shuttle bus. I bought my ticket ($5) inside the visitor's center from a rather unfriendly lady. Then I walked out to check out Drakes Beach. 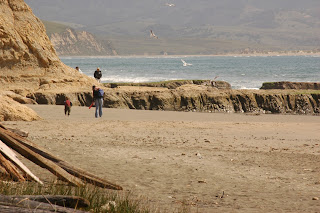 Drakes Beach
I was tempted to stay, but it had already taken me longer to get here than I had anticipated, so I decided to get in line for the shuttle bus. I only had to wait for about five minutes before the bus driver started loading us on. He was very friendly and full of interesting information about the park. He pointed out some Tule Elk on a distant field ridge (out there with the cows). There are many, many rolling green fields dotted with cows here. It is actually kind of nice to see these cows. These are the Happy California Cows, and yes, they do look happy. 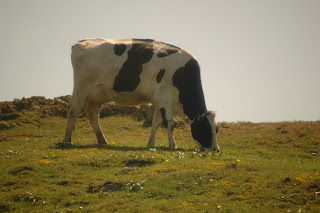 Happy Cow
We continued through the rolling green hills and narrow road to the Point Reyes Lighthouse stop. This is where I got off. The views were amazing and I couldn't believe I had never been here before. 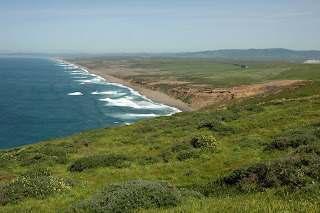 A view of the national seashore and peninsula
The ocean crashing waves stretched north and then curved around to a point that disappeared into the distance (Tomales Point). Looking further east you could see across the headlands to the calm waters of Drakes Bay. The land in between was dotted with buildings and ranch land. 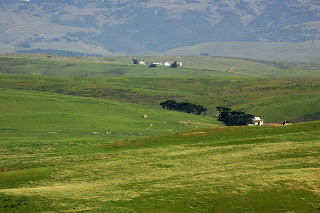 Headlands rolling green hills
I started walking up the hill toward the Lighthouse views. There were lots of nice wildflowers, especially the yellow Lupine (I don't know the official name) blooming. 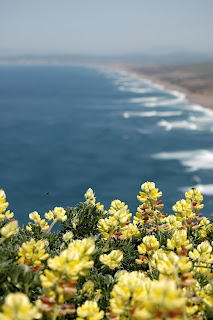 Yellow lupine
I made my way over to the Lighthouse overlook. There were many people there watching for the migrating gray whales, which were heading north for the summer with their calves. Apparently, during this time of year, Great White sharks are breeding at the nearby Farallon Islands and try to feed on the calves, so the mother whales keep the baby close to the surf, where they are less conspicuous. 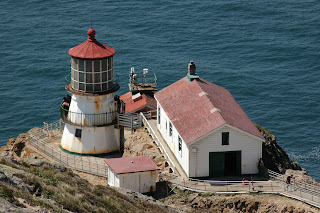 Point Reyes Lighthouse
There were lots of good wildflowers here, but no good place to really take a picture because of all the cliffs. So I took a look at the cliffs instead. 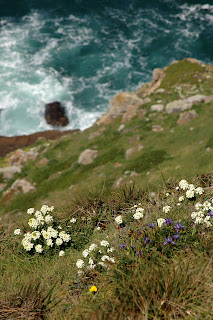 Cliff wildflowers
I turned back around as I wanted to get over to Chimney Rock with plenty of time, although I could spend a lot of time here, enjoying the views. 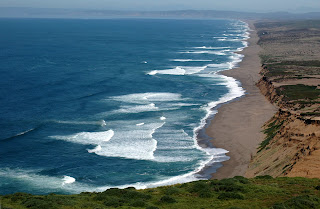 Point Reyes National Seashore
As I was walking along, I noticed some dear not too far away. It seemed really odd to see these black-tailed deer so close to the ocean. 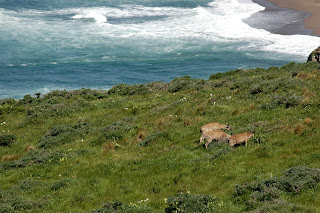 Black-tailed deer
I also noticed a songbird sitting in the bushes along the trail. Its song just added to the pleasantness of the afternoon. I was trying to tear myself away from the amazing coastal views to try to get serious about catching the next bus to Chimney Rock. Ok, one last look! 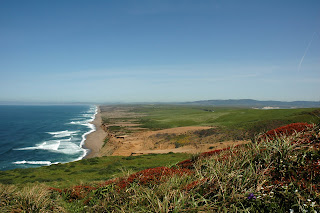 One last look of this amazing coastline
I saw the bus coming and I ran down the hill, no need, since it took a long time to empty the bus of its current occupants. I found a comfortable spot and the bus took us down to the Chimney Rock stop. Here at Chimney Rock is the Elephant Seal overlook, some park staff residences, the lifesaving station and the Chimney Rock point, which is the point between the Pacific Ocean and Drakes Bay. I decided to head off to the Elephant Seal overlook. There lots of nice wildflowers along the way. When I got to the overlook there were several docents there to point out Manta Rays and some of the Elephant Seal pups. 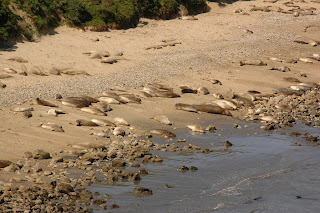 Elephant Seals sunning
After a bit, I decided to turn back and see what else this spot had to offer. When I turned back I noticed that the opposite way had some nice views I had not noticed before. 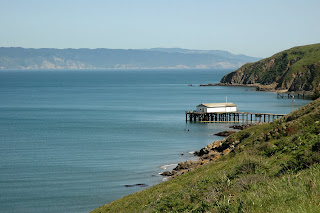 Calm and serene
I returned down the trail to the bus stop and then continued on to the Chimney Rock trail. It led out to the point, with the rugged coast on my right and the calm bay on my left. 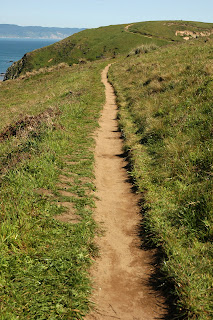 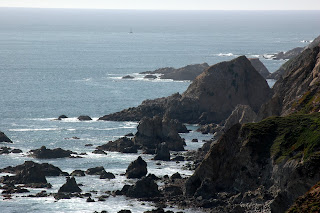 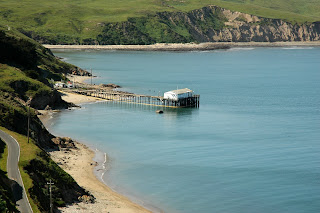 Calm waters of Drakes Bay
There was a sprinkling of wildflowers along the way of many different colors. I did notice that there seemed to be the largest variety of yellow flowers. The only flower I knew by name, were the wild purple Iris. 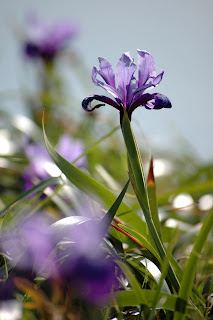 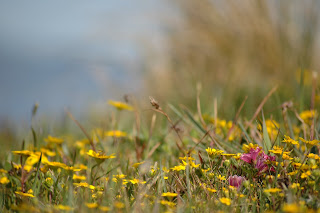 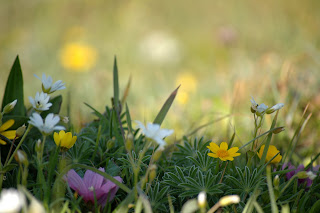 Tiny, short wildflowers
I really had to lay on the ground to get these shots. But since they were sprinkled and occasionally in patches, it was easy to find some nice grass to lie on to get my camera ground-level with the flowers. My neck was beginning to hurt a bit from all of this and I could tell the the sun was really beginning to dip down towards the horizon, so I decided to head back for the bus. The last bus came at 5:30pm. I really didn't want to hurry, because I felt like it was such a rare opportunity to have such nice weather at this spot. So, I decided to put my camera away and really focus on enjoying the last bit of these gorgeous surroundings. 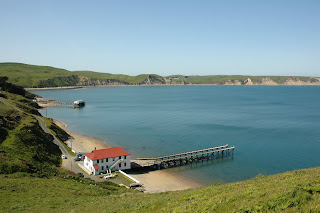 Beautiful surroundings
I did not hurry back, but sauntered along the trail. When I reached the bus stop, there were only a handful of people waiting. I stood in the sun, which felt so nice. The bus finally came and we all crowded on. Back at the Drakes Beach parking lot, I was tempted to leave and get home before it got too late (I was hurrying because I thought we might have plans with some other people that night). The sound and smell of the ocean was too irresistible. How often do you get to go to the ocean on such an amazing day? I walked down to the sand and then out to the water. I put my hand in the water, it was so warm! 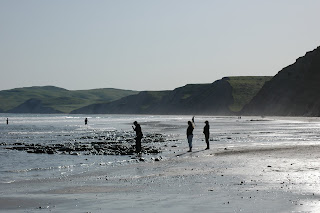 Warm day at the beach
For the Pacific Ocean it was really warm and I could understand why people were swimming in bathing suits. I really wished I had a bathing suit to change into, if I had, I would be out there in a second. Instead I stood there, snapped a few photos and felt the water again and again. 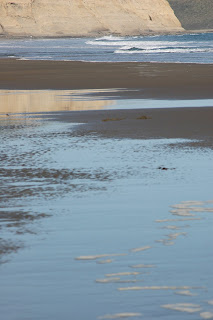 Beautiful day at the beach
I went back to my car reluctantly. Sigh, but I started up the hill to Sir Francis Drake Boulevard. At the top of the hills, I knew there was on last thing I had to do. I had to take a picture of the field of wild sweet peas. I had noticed them coming and going on the bus and the late afternoon light was dazzling. 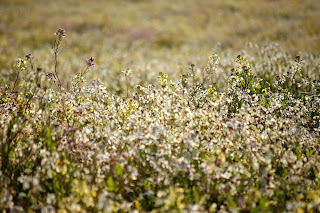 Field of wild sweet peas
While I was at the side of the road, admiring the sweat peas, I noticed a hawk fly over head. I tried to get a good photo, but I only got one okay one as it was going down into the field, for the kill. 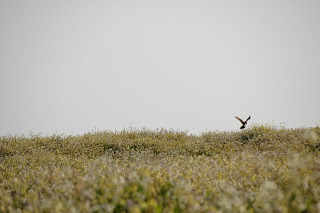 Hawk in the sweet pea field
A few other people stopped, probably wondering what I was looking at. I ran back to my car and continued down the long and winding roads. I tried following my directions backwards and then started cursing myself because I thought I got lost. Then I discovered I was on exactly the right road. At one point it seems Sir Francis Drake Boulevard ends, which is frustrating because you know it goes all the way out to Highway 101. I did accidentally get into a turn lane that I could not get out of, closer to 101 and I ended up driving through San Rafael, but not much harm done as I eventually found a way onto101. It had been a great day. The sun and warmth had really made it nice. But I was now kind of wondering how things would look differently with the mysterious and romantic fog? I guess I will have to go back to find out, and chances are fog will be the weather I will get.

The Details:
Photographs: For more of my photographs of this trip, visit: Point Reyes National Seashore.
All rights reserved.