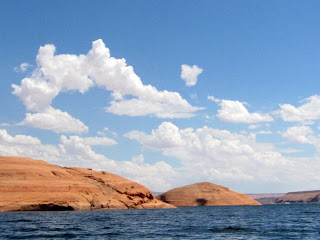 This part of Utah is full of orange and blue. The dirt and rock here is a deep orange, painted on canyon walls and large, rounded, rock formations. The blue comes from the amazing water of Lake Powell below and from the far stretching sky above. This is the Land of Orange and Blue.
After relaxing the morning away, Becki had arranged for me to go kayaking on Lake Powell, so after lunch I went down to the marina. 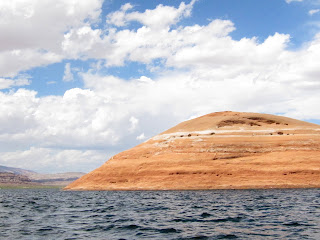 A young man helped me with my kayak and I set off into the orange walled lake. The sun was hot but the splashing of the water kept me cool. The sky was alive, brilliant blue dotted with white puffy clouds. Becki had warned me about unusual thunderstorms and said if I saw a dark cloud appear at the end of the canyon I should head back toward the marina immediately. I passed a few gatherings of rocky beaches, but mostly I was enclosed in the canyon walls and rounded rock formations. I was in search of some smaller canyons that were fabled to snake inland, creating narrow hallways of water and rock, places to be explored only by small boats or kayaks. I rounded the bend, around the beehive rock formation and in the distance I saw a large mass of cloud spilling over the west side of the canyon wall. My sunglasses are tinted yellow, so I took them off to scrutinize the color of this cloud. It was light gray, not the shade of darkness that I would expect of a storm and it really was quite far off, so I kept going. I thought, even if it did storm it was so far off in the distance it could not possibly affect me. Then I saw, like a long finger, a stream of distant rain, reaching down toward the land. Eventually, it would reach down over the water and whoever, or whatever, was underneath it would be rained on. But it was so far away. 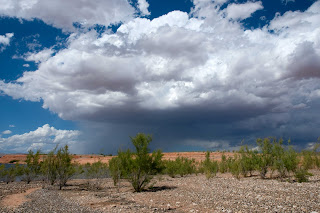 As I watched this cloud sneak its way east over the water. It was so far away, it was raining somewhere. Then, in a suddenness I was not expect an incredibly long zig zagged flash of lightning bolted down, wherever it hit, I don't know, it was out of sight. I filled with fear and distress. What if it hit the water? How far does the electricity from lightning travel in the water? I went through my brain searching for the school lesson about lightning and water. I knew if you were swimming you should get out. But wasn't that because you were probably touching the bottom? What about boats? They aren't touching the bottom, are they okay if electricity passes through the water? Plus they sit on top of the water, they are only partly in it. Is it only swimmers who need to worry? Here I am sitting on top of the water in a plastic kayak. Is this safe? Could I be in danger? How far does electricity travel. All of these thoughts passed through my mind in a matter of seconds. At the end of those seconds, or second, I made a right turn and headed, with a vengeance, to the closest rocky shore. I certainly wasn't going to test the physics of electricity today. 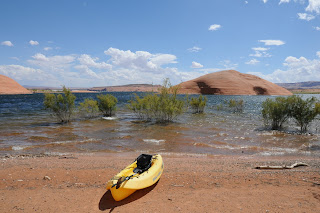 I paddled as hard as I could to the shore. There were a couple of houseboats docked along the side and next to them, a few tents. I pulled my boat completely out of the water and stood on this isolated bit of rocky beach, dotted with tall growing green weeds and I watched the storm in the distance. The storm seemed to gather darkness at its bottom, its top was still innocently fluffy and white. I watched as the finger of rain grew and thickened into a larger mass. I looked behind me, to the other end of the canyon where it was bright and cheerful and storm-free. 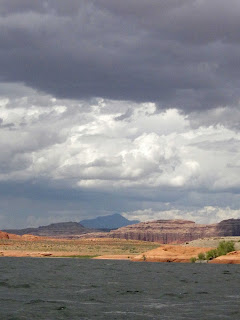 When I felt like the storm was safely over land, I got back in my kayak. I surveyed the sky in all directions. Hmm... there was a mass of clouds gathering, which seemed like the might peek over the canyon wall and display themselves directly over the marina, directly over Bullfrog. Was it really something to worry about? Those clouds looks so innocent. But I had no idea what was in store as they traveled closer since I could not see over the high, distant, canyon wall. Maybe I should head back, play it safe? Maybe I am being too cautious, I tend to do this. Maybe I am making something out of nothing. I keep my eye on it as I paddle out into the lake. The clouds were moving quickly. Actually, this is starting to look like that other cloud, the storm cloud. I would hate to kayak for such a short time. Maybe I could paddle away from it and I could miss this storm? Could I paddle fast enough, away from the marina and avoid this storm too? I looked in that direction, but it looked like maybe more clouds were coming from over there too, well... maybe. Logic spoke to me, "Kathleen," it said, "this looks like a storm could be approaching. You don't know. You don't know if you can outrun it. You don't know, if you do outrun it, if another storm wouldn't follow that one. Then you will be very far away and you will be stuck there. That could be dangerous. That would be dangerous. It is not worth the risk." 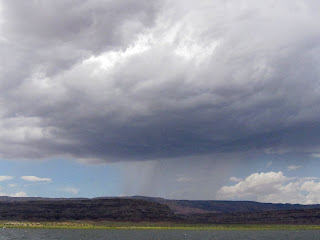 So, I turned back towards the marina, angry with myself. Why was I angry with myself? Because I felt like I was not a risk taker, I was submissive, I was a slave to my common sense and logic. But I went back anyway, my paddling conflicted as I did not want to admit that I was returning out of logic, or that I might still have a chance to go further away and explore when the storm did not appear. But then, over the horizon, I saw, not a finger of a rain cloud reaching toward the horizon, but a whole hand, two hands worth of rain fingers. Holy Crap, I thought, that looks bad. 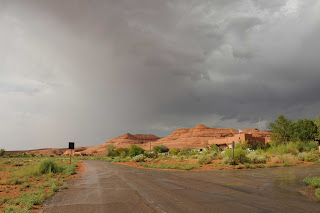 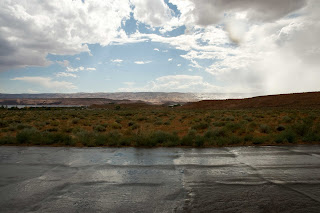 Before I knew it, the storm was rushing in on me, closing in fast. I paddled with intensity, focusing only on my mechanics to make myself move stronger, faster, more efficient. Occasionally I broke my concentration to observe the progress of the storm. This propelled me faster and harder. I was out of breath, my muscles were pulling as hard as I could. I leaned into it, I pulled I used my arms, my back, everything I could. As I approached the marina dock I saw the young guy who had helped me put my kayak into the water. He appeared there like he had been searching the water for my bright yellow kayak and now I was here and he was glad to get me out. When I pulled up and got out, we lifted the boat out of the water and he took my lifejacket and paddle. "You came back just in time. Do you want to call Becki to come get you?" he said. 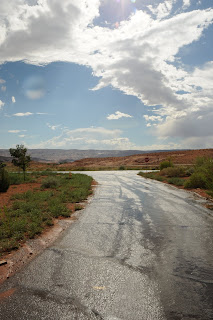 Normally I would have walked to two miles back to her house. "Yes," I said, "I better not take my chances in a thunderstorm." It had started to gently rain. I went into the marina office and someone was calling Becki at work. I had not been inside the building for a full minute before the storm unleashed itself. Rain came down so hard and loud I thought it couldn't possible just be rain. Sure enough, it wasn't, it was hail. It hailed for several minutes while the thunder and lightning continued to do its thing. Eventually the hail stopped and the rain continued and even then, that started to relax a little. The thunder seemed less frequent when I saw Becki pull up across the marina in her car. I would have to run across the thin, wet walkway across the water to get to her. I made a run for it.
"You made me drive in hail!" Becki exclaimed, jokingly. When I got back to the house and Becki took off for work, I surveyed the sky. It looked like another storm was right behind. But this time I got my little video camera, my voice recorder and my camera out to capture the sights and sounds of the thunderstorm. 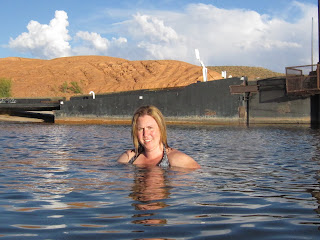 After Becki got home from work, she made dinner and we hung out. We went down to the ferry dock and swam in the water and talked. We threw the ball out into the lake to Pancake who swam out there in a hysteric fit of joy and swam back, too excited and too out of breath. The sun was going down quickly and it started to get cool. 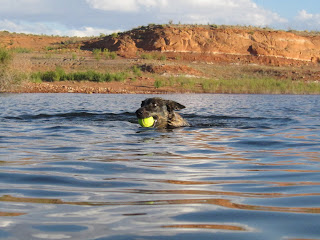 Then we went up to the one and only restaurant and had some dessert while the sun went down over the lake. I had Snickers pie, yum. In the evening we sat out in her backyard and watched the sky, looking for meteors. The grand finale of this meteor shower was supposed to appear the next night. Mike came home and a neighbor came over. Here in Bullfrog, you not only work with your co-workers, but you live amongst them too. There is no escaping. Becki went to bed and Mike and I talked and listened, in silence, to the sound of the crickets.
Posted by Unknown