Oh Canada. How Canadians love Canada, like I have not seen any other people love their country. As an "arrogant" American, I have often assumed Canadians enthusiastically proclaim their love for Canada just to prove to Americans that they absolutely, under no circumstances, are jealous of us. I have even joked around, calling Canada "America-lite". How could any self-respecting, English-speaking member of the New World not be completely ashamed to still be part of the British Commonwealth? Can you really not feel some sort of embarrassment to have to print the head of the Queen on your money? The Queen! The monarchy! The old-fashioned, out-of-date, intolerable idea that you are "special", "privileged", or fit to rule, simply because you were born to certain parents. Oh yes, your majesty, you deserve my utmost devotion, as your subservient subject, because you have achieved the amazing feat of being born into the "royal" family. No thank you, in fact, thinking about that idea makes me want to puke. But, I guess that is the Yankee in me talking, I am, after all, from one of the original thirteen colonies, growing up in the birthplace of American Liberty and Freedom, where we celebrate, live and breathe the idea that this life is ours to make, these rules are ours to break in the name of... of what? Free will? Because it is the right thing to do? Something like that. Whatever name you want to give it, it is a truly "noble" effort our country has undertaken, to balance community and the individual, freedom and safety, expression and peace. But... Canada? Okay, so I don't really know why Canadians are so damn proud, maybe they really do love their queen-worshiping, hockey crazed, beautiful, yet frigid country. But they do. Oh, Canada.
Then there is French Canada or Quebec. Where does their allegiance lie? Do they even consider themselves Canadian? Or do they begrudgingly accept it? I can not begin to know, because I don't speak French. Even in the midst of English speaking Canada they hold fast to their language and their culture and they refuse to completely succumb to the British throne. This is marvelous! Let them be free! Let them secede! I say the same thing about Northern Ireland and Texas.
It was gray out and kind of cool with threats of rain. But as we walked through Chinatown, next to our hotel, the skies began to clear. Of course, as tourists, we do the touristy thing and walk over to the Vieux-Montréal area, the old section of the city. The streets are narrow, some cobblestoned or stone paved. There are hanging flowers, and window boxes cheering up the old, gray stone buildings.
We walked over to the old cathedral where horse drawn carriages pick up tourists and cart them around this touristy section of the city. At noon the cathedral bells chime to celebrate the midday.
In one doorway a young, punk-ish, Canadian woman in a neon yellow jumper with hot pink hair leans against the stone and smokes with a grimace on her face. Bicycles zoom past. Postal workers deliver mail. We pass many cafes serving freakishly expensive lunch and choose one for ourselves. 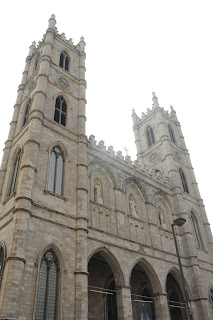 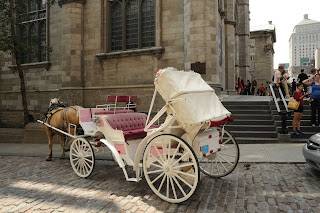 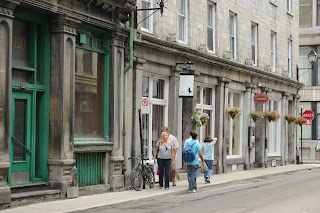 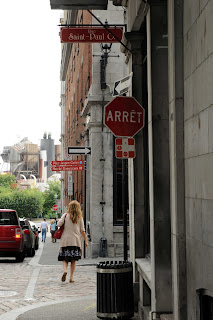 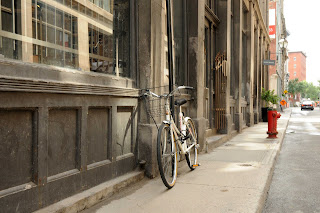 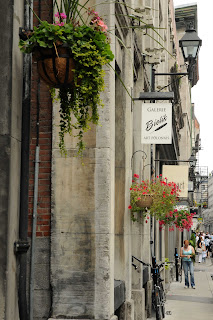 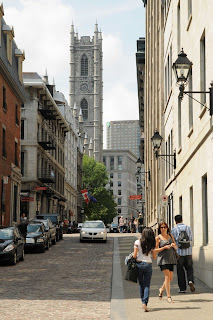 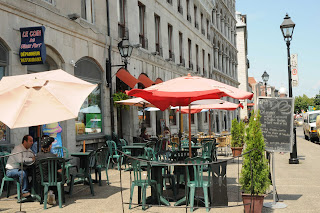 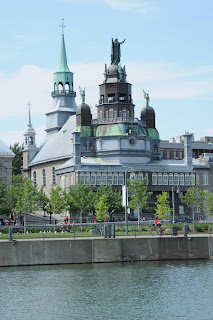 Down at the port, a tugboat is doing its thing on a barge, while they get ready to lift the giant containers onto shore. I think at this point we are actually a little bored, so I take the map out to see where we can go next. While stopped, a middle-aged couple ask us if we need help finding something. They seem determined to point us away from the touristy part of Montreal and go inward to the "real" Montreal, the French-speaking Montreal. I often feel this way about visitors who come to San Francisco. We are convinced by them and head towards the Latin Quarter and to the Parc La Fontaine. 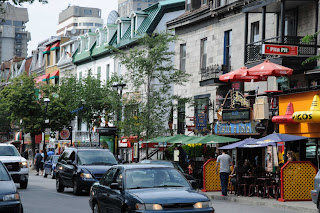 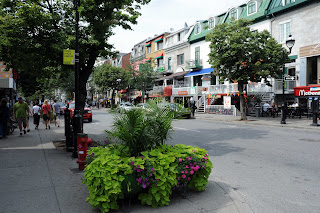 The Latin Quarter looks different during the day than the night before when it was dark and pouring rain. Sloping gently uphill, the neighborhood is lined with restaurants and shops splashed with bright colors. The homes too, are often bright, either in the color of the buildings, the roofs or the trim, but also in the plants. There are lots of flowers, spilled over in planters along the sidewalk, from fire escapes, or from window boxes. The most popular flower seemed to be begonias, reminding me of Paris. It feels homey, in a very trendy way, and reminds me a bit of the East Village in New York City. Perhaps true trendiness is when you make no effort to do so, but despite your best efforts, you just are trendy. I will never claim to be trendy because in plain and simple terms, I am not and will not ever be trendy. I just don't know how to do it, or be it. I marvel at trendy people, thank god for them, because I think it is an art I really appreciate, especially having no skill for it myself. The people on the streets look like they live here, they know where they are going, as opposed to the people in the touristy section, wandering, looking aimlessly around. Here, if you are walking on the sidewalk you have a place to go and things to do. The air is filled with musical French conversation, like a language symphony. It is so real and enveloping that I get the feeling that if I stayed here awhile I would naturally start speaking it too, it would just spout out, like a fountain from some expressive place within me, you just can't help it. I like hearing this foreign language, which I can not say about all foreign languages. For instance, I don't enjoy hearing Chinese when I am in Chinatown (or anywhere else for that matter) it just doesn't appeal to my ears. Maybe it is the tones and the rhythm, I'm not sure. I remember in one of my favorite movies, Vicky Cristina Barcelona, Cristina tells Maria Elena that she took Chinese in college because she thought it sounded pretty. Maria Elena asks Cristina to say something in Chinese, which she does and after which, Maria Elena says dubiously, "You think that sounds pretty?" I was glad I am not the only one. I am not really picking on Chinese, really, I won't say I think English sounds pretty either, but I am not going to analyze it, I can't, it is just my native language, it is not a choice. But if I were to choose a language, simply because it sounded nice, I might pick French, or maybe Italian. Thinking of all this makes me want to go to Spain, Italy and France. Sometimes I get the travel bug so bad I actually feel a strong feeling in my stomach akin to sickness, almost like nervousness but more like yearning. 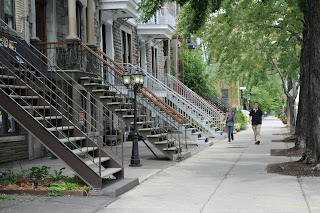 Speaking of Italian, we stopped in a gelato place, but I guess it is French gelato. I ordered lemon, which did not taste like creamy gelato, instead it was more like Italian water ice that I can't find anywhere west of Pittsburgh, and it was exactly what I wanted. In this neighborhood, I like how there are bright colors, 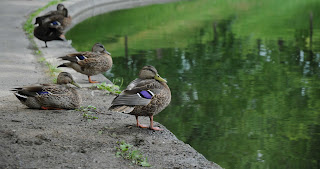 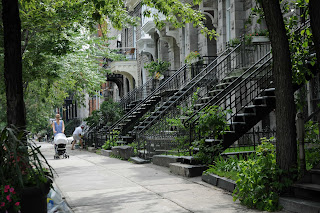 After leaving the Latin Quarter we walked through a more subdued neighborhood, lined with old-fashioned, city townhouses with long, long steps reaching out from the house down to the sidewalk. I found these a bit odd, strange, compared to the Victorian townhouse steps of San Francisco. We find the park, Parc La Fontaine. It is cool, emerald green, with a large snaking pond dotted with tall, swooping trees. Therese could not get over the amazing grass. She kept saying, "I love this grass! We didn't have anything like this in Iraq." She didn't talk about her time in Iraq very often. She then told us a story about how visiting generals or bigwigs of some rank, were asking why the soldiers did not pull the weeds around their FOB, or military post. The bigwigs complained, but the soldiers left the weeds because it was the only green thing they ever got to see in the parched, summer, Iraq desert. Somewhere, even weeds are precious and a welcome sight. This thought makes me smile. 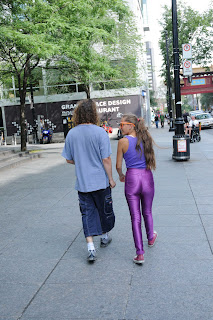 Turning around to head towards the car, we took a different route back to the parking garage. It is more commercial, not as neighborhood feeling. One section is slightly dodgy. It is less scenic than the Latin Quarter, but here we encountered a pedestrian, the purple pants girl. I don't think you can wear shiny, skin-tight, purple pants anywhere without expecting looks. I think you must want to be noticed. This concept is foreign to me because I am always trying to dress so that I don't get noticed, remember I am not trendy? I'd much rather wear muted colors and disappear into the crowd or the background or the landscape. This works so well, that it seems I often end up invisible.
We exited Montreal just as the Monday rush hour traffic starts. We zoomed past farmland and meadows full of multi-colored wildflowers. French signs turn into English signs. The sunny skies turn into overcast skies, which turn into rain. It was raining in Sackets Harbor and looks like it has done so all day. Merle is excited to see us. He had good reports from the dog sitter. I packed quickly. I am leaving very early in the morning. My flight to Salt Lake City is scheduled to land around 1pm, after which, I am supposed to drive to Jackson Hole, Wyoming to visit the Grand Tetons and Yellowstone. Paul called, there was an escaped murderer hiding out in Yellowstone National Park. Hmm... the chances of this affecting me was remote. But, I would be camping and hiking by myself. Hmm... a female by herself in a rather remote part of the country with an escaped convict who had already killed two people in their camper in New Mexico the week before. Maybe they would see me as an easy target. Maybe he would gone by the time I got there. Maybe he would be captured by the time I got there. Maybe not. Maybe it wasn't worth the chance, however remote. I didn't want to became a news story or a statistic. Maybe I am being paranoid, absurd, ridiculous. Maybe I am too cowardly to take risks. Maybe this kind of risk is just dumb. I would be so disappointed to miss the Grand Tetons and Yellowstone, which was supposed to be the climax of my hiking and landscape excursions. Maybe I should just go with the flow, turn my canoe downstream, make the best of it, use sound judgment, not let my expectations and emotions make my decisions. I could go see Becki in southern Utah. I didn't want to go there originally because it would be too hot, but I did want to see her. It is beautiful where she lives, although a different beauty. There is plenty to do while she is at work and after work I can hang out with her. All these thoughts raced through my mind over a span of about five seconds. I had my decision. 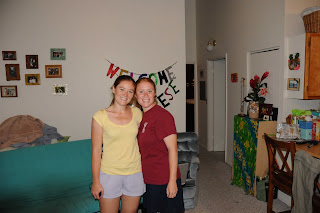 "I'll go visit my friend Becki in southern Utah instead." I said. Therese seemed relieved by this idea. I called Becki and five minutes later I was completely changing my plans. I called Paul back, he seemed relieved too. I did not let my disappointment about the Grand Tetons and Yellowstone linger long, what's the point?
I finished packing and hung out with Therese and we talked until midnight. I was sad to be going, to be leaving family. So sad, such a familiar sadness every time I leave, I can hardly take it.