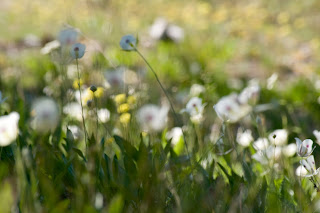 I am still lying in my bed in the Eurovan when I hear Rose say softly, from the top bunk, "I don't think I am going to hike today. I think I am going to relax by the lake, maybe swim and read. But if you want to go on your hike, I hope you still go."  I am relieved. Not relieved that Rose is not going or that I want some time to myself, but I am relieved she is doing and saying what she wants and does not feel obligated to accompany me on the hike.
After some cereal and tea I set about prepping for my day hike in the mountains and Rose starts her detailed pasta sauce clean up in the van. I feel a little bad that I am not doing more to help her, but it is hard to have two people in that small space. Since we have been staying up late, we have also been getting up late. Its after noon before I leave the campground. I drive back down highway 75 north toward the small town of Stanley. I have not yet seen this countryside directly outside Stanley in the daylight.
Stanely. Stanley, Idaho. Oh, I am... speechless.
There is no way to adequately, accurately describe Stanley. Words, photographs, even film, could never explain this place or give you a sense of it. It is not just a place, it is an experience. To know it, you must be part of it, to be in Stanley, to absorb all of it, occupying all the senses, even those senses beyond the five we know. I can not know how someone can come here and not be awestruck. But since you are not in Stanley and maybe have never been, I will attempt to describe my time there with some photographs and with words I might manage to find.
Stanley. Stanley, Idaho. Where was I? Oh yes, I was driving north on highway 75, four miles south of town...
About one mile south of Stanley, on highway 75, the rolling green mountains dotted with pine trees are on my right. The Sawtooth Mountains, tucked behind pine forests are on my left. I stop at a pullout to gaze in awe at a wide, shallow river flowing between the road and a green pasture along the hills.
I turn left onto Highway 21, right on the edge of Stanley. Stanley's population is about 100 people, that is, permanent population. I guess quite a few people only live in Stanley in the summer. Stanley has no traffic lights and a few stop signs. Highway 21 goes right through Stanley with a few buildings on either side. Turning left onto a very wide, dirt road and then a quick right at the stop sign will bring you to downtown Stanley, another wide dirt road with a scattering of shops and restaurants on either side. Stanley is two blocks deep and behind it, green pastures stretch out flat to the Sawtooth mountains to the south. To the north, the river and a few houses reach toward the rolling mountains.
I drive downtown and pull into a parking spot in front of the Stanley Baking Co. to get some coffee. The end of the road ends at a gate with a road extending beyond it into a field. I order my coffee and chat with the cashier, she is a young woman who is cheerful and lives in Stanley in the summer. I find that people here are nice, they wave to every car they pass on the road and say hello if you happen to pass them while walking. My coffee is really good and I get back in my car to drive towards the trailhead of my planned day hike.

Overall, the trail had been pleasant, although not spectacular. While I hiked I went back and forth between admiring my surroundings and concentrating on my posture while walking. Sometimes, my mind wandered. I love hiking because you are moving outdoors. I like movement, I think it soothes my mind, it pulls everything together and focus becomes easier. I like the outdoors because it is refreshing and rejuvenating and nourishing. I like the smells in the air and the earth under my feet. I like to be amongst other living things, plants and trees, but also a habitat, an environment, it has a life of its own, maybe like decorating a living room, interior design, it is nature's "exterior" design and it is wonderful.
The trail seems to end at the creek again, which is wide and shallow and salmon colored. I wonder if this is how it got its name, not from the fish, since it seems impossible that they could exist here, but from the color of the rocks. I am hungry, so I sit right at the water's edge and eat some dried fruit and buffalo jerky that I brought with me. The father and his boys appear and ask me if I found a good place to cross. No I hadn't, maybe I would turn around here and go back, I tell them. Then two men, maybe in their late thirties, appear and also look for a place to cross. There are six of us, a temporary community of hikers, trying to solve the problem on how to cross the creek.

I take my shoes and socks off and carefully cross. I head uphill toward the sound of the falls, but the trail gets vague. I see the two men coming back down the trail and I ask them if they saw the falls. They said no, the trail got thick and hairy, and looked like there was a lot of poison oak, so they turned around. We chat for a while. One of them is from Minneapolis and one is from Chicago. The guy from Chicago is quieter and seems nice. The one from Minneapolis does more talking, asks questions and then interrupts my answers, he must be too busy listening to himself. I had already decided I did not need to see the falls, I wanted just to hike and I was satisfied. It was getting late in the day and the sun looked close to dipping behind the tall, jagged peak of the Sawtooths, so I decide to turn around. The two men get ahead of me as I stop to photograph a patch of wildflowers. I do this several times on my way back, since the light is getting slanted in the sky and is catching nicely on the wildflowers.

While crouched quietly in the forest, changing the settings and focus on my camera, I become nearly silent. I am no longer moving through the forest, but the forest moves around me. I hear the animals, the insects, the breeze. The air becomes more fragrant and the surroundings more focused. You are no longer an intruder, a visitor, you are part of it and it is part of you.
I am getting a bit anxious since I told Rose I would be back around the same time that we got back yesterday. The sun is dipping quickly and I don't want her to worry, although I don't know if she is the worrying type. I start to job along the flat straightaways and downhill, holding my camera against my body so it doesn't bounce. I think about how completely dorky I must look, jogging with a camelback and a camera in the woods, but there is no one around, but I still feel dorky anyway. Again, the elevation causes me to be out of breath quickly so I take breaks. I am sweating and out of breath, this is how I like to know a place. If the sun of a place can make you sweat, if you take big gulps of the surrounding air while out in the open nature, then maybe you can know a place like you can't from a car or from sitting still. It becomes part of you. It is calming. It is like discovering new things about yourself, or old things, that you had forgotten.
Stillness and brisk movement. This is how I feel most alive. I like to be still and I like to move quickly and all the places in between are like drinking coffee that is no longer hot, it just resembles what it was supposed to taste like. It drains me, the in-between.
I arrive back at my car and head back toward the main road. I stop along Stanley Lake and take a few pictures. Back in Stanley, I pull off on the side of the road to call Paul, where I know I will have cell phone reception. I miss him. I am grateful for our talks, reconnecting, even if just for a short time. Back at camp Rose has started making dinner. I start a fire and we eat stir fry and roast some hot dogs over the campfire. We talk again and share what we each did that day. It sounds like she had a nice day and I am glad. It was nice to go off by myself for a several hours and what makes it nicer is, at the end of it, to have some good company. Later, we make S'mores with dark chocolate and then go to bed early, early for us, that is. Tomorrow we leave. I drive to Salt Lake City and Rose drives back to Bend, Oregon. It was really nice to hang out with Rose, to get to know her better, to have someone else get to know me. I fall asleep feeling thankful.