Today is the first game of the World Series, which is going on across town. When I walk out of my house, I can look in the downhill direction and see the glow of the lights from the stadium three miles away. I will say one nice thing about the Giants, because I can only think of one nice thing to say about the Giants, no I'm kidding, sort of, yes, no. Ok, I don't really care about the Giants one way or the other. But I will really extend myself and say three nice things about the Giants. One, I like their orange and black colors because they remind me of a sports team from my hometown with the same colors. Two, they have a nice stadium. Three, I like their pitcher, Tim Lincecum, I like watching him pitch. But I don't really care to watch the World Series. So, during the fourth inning, which I was not watching, I decided to go for a walk.
It was a lot warmer outside then I thought it would be and I quickly become hot as I walked uphill towards University of San Francisco. The fog had come in some time in the morning, chasing away the dry winter chill. It was strangely quiet as I walked except for an occasional outburst of cheering I could hear coming from some of the apartments and houses. When I got to the top of the hill in front of USF, I walked the steps up to Trinity Mountain. From there, you can enjoy nice views of the city, although often obstructed by trees. The best part about this hill that USF sits on top of is the grass. I seriously think they have the nicest grass in the entire city covering their hill. It may even be the nicest grass I have ever seen anywhere. I started walking downhill on that grass. It is thick and feels like it has airpockets underneath it to cushion it and make it springy. It is like walking on pillows. It also leaves your footsteps imprinted, like snow. It was obvious, from the lack of footsteps, that no one ever walks on this grass. Maybe it is against school rules or something like that? Cool. 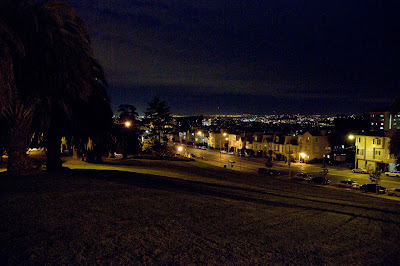 I looked down the long hill stretching down toward the street. I wanted to roll down it and I would have if I didn't have my camera with me. There were very few people out on campus. The grass smelled so good. Gravity was pulling at me to head downhill. I put my camera back in its case and secured it across my shoulder. I checked my pockets and secured their contents. Then I pushed off. It only took one or two pushes of my legs before the hill, gravity, the air cushions under my feet, took over. I was running, no floating, downhill on pillows at a delicious speed. My strides were long, longer than I expected and effortless. I felt like a gazelle. Not a joint in my whole body felt anything other than air as I was propelled across the grass, gliding toward the furthest corner. The air rushed passed me, it was exhilarating, it was like running that was laughing. When I reached the bottom I hopped onto the sidewalk and I couldn't stop smiling as I walked towards home. Then I started laughing out loud. That was the most fun I have had in a long time.
Posted by Unknown