It was perfect. We had been sort of thinking about getting a dog. My sister's Jack Russel Terrier, Daisy, who has an incredibly sweet disposition, had a puppy. The puppy was a Jack Russell/mini-Australian Shepherd (I love shepherds) mix and she won't get very big, perfect for a city dog. My sister works magic with animals and to get a puppy raised by her from one of the sweetest dogs ever was a real and rare gift. The fact that I am not working right now means I have the time to spend with a puppy. The timing is perfect! 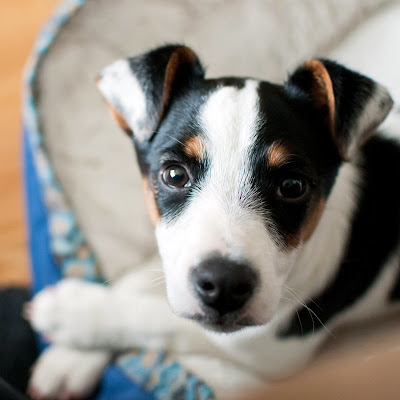 I met Poppy when she was only one week old. She was born on a horse farm about two hours north of Pittsburgh, a couple of weeks before Christmas. When I saw her, she didn't even have her eyes open!

My sister kept her to do some training and also we wanted to be back from our vacation in Mexico before getting a puppy. We named her Poppy after meeting her on a video skype call. We decided to stay with the tradition of a flower name (since her mother is Daisy) and Poppy was the first name that came up and it just kind of stuck. After waiting weeks, she finally arrived by airplane yesterday! It was pouring rain and foggy in San Francisco which caused an hour and a half delay and poor little Poppy had to make a layover in Minneapolis, but she arrived in good spirits! When I got her out of her crate at the cargo area of the airport she just wanted to play.

At the pet supply store they told me she would probably want to sleep a lot after such a long journey. That has not been the case with Poppy. She wants to play ALL THE TIME. She follows me or Paul around wherever we go. When she does finally stop playing she likes to lay down by you and put her head on your feet.
Poppy is ridiculously cute. Here is a video I took about ten minutes after getting her home from the airport when she went crazy after we gave her her first toy.

She has already brought a lot of smiling to our house!