Interstate 84 winds along the Columbia River, wedged between the water's edge and some dry, sometimes rocky, sometimes rolling, hills.


After grabbing some coffee downtown, we hit the interstate and left the green, fertile valley of Hood River behind. It was about three miles outside of town, with the dead, brown/gold grasses blowing in the wind, barely clinging to the soil, when the true dryness of the area really hit me. Was the lush Hood River Valley, just a manufactured reality of smart irrigation? If so, why does this bother me?
The road continued and the climate seemed to become drier and drier. We discussed our impression of Hood River. The same picture kept creeping into my mind, one where I am at some social gathering and I meet a new person that I think is really cool. I'd like to become friends with this person, but I am starting to get the impression that the only reason the person is talking to me is to be "nice" and that they have no interest whatsoever in becoming friends. I'm not sure why this keeps running through my mind, everyone I met in Hood River was really nice, although nearly everyone was a transplant (mostly from Portland). As I ponder this, we turn off the interstate on Highway 730, through farmland taking us straight into Washington.
We make our way onto Highway 12, deeper within the dry, dry countryside, on our way to Walla Walla. From my days of working in a fine wine store, I've often tried to imagine this Washington wine country. So far, it wasn't exactly living up to the picture in my head. First, it was kind of hazy. Second it was really, really dry and there were no vineyards in sight. I reminded myself that Napa got really dry this time of year as well and eventually I did start to see some vineyards, spreading some green across the golden hills.
We stopped in the small city of Walla Walla, Washington for some lunch and as we walked around downtown, the country, local charm began to grow on me. We ate a local place, called Stone Soup and had simple sandwiches. There were normal, everyday people, going about their business, eating lunch on their lunch break, making a living. Then there were tourists eating at nice looking restaurants, enjoying their time off and probably getting ready for the evening wine tasting. Here, in Walla Walla, it seems that most wine tasting starts after 5 p.m. In fact, I had a hard time finding a place that was open where I could buy a bottle of local wine.
I walked into a place called Coffee Connection for an post-lunch cup of coffee. As soon as I walked in, I felt out-of-place. It looked more like a sit down place, where you order a meal, not a coffee to go. A middle-aged man with nearly mullet hair, walked up to me and said, "Hi Sweetie, table for one?" Yuck. Creepy. I generally hate being addressed this way except by a very, very, select few people. I inquired about coffee to go. "Sure honey, you can get a coffee to go. We have a special on chai today, wouldn't you like to try a Vanilla Chai instead sweetie?" he said. No, I would not like a freaking vanilla chai, I thought. Instead I told him I would just take two coffees to go. Somehow he managed to work in honey or sweetie into every single sentence.
"Room for cream, sweetie?"
"Do you want a straw, honey?"
"Is that going to be all, sweetie?"
"Here's your change, honey."
"Bye sweetie, have a good day!"
The guy was creepy. He was not just the older gentlemen polite guy, he was creeping me out and I couldn't get out of there fast enough. On top of that, the coffee was a small step better than most gas station coffee water.
Fortunately, we found another coffee shop, dumped our nasty coffee for replacements, just before I sauntered into the Charles Smith tasting room. I bought a bottle of inexpensive Cabernet Sauvignon just as Poppy burst into the tasting room, hot on the trail of another small dog. Apparently dogs are not only welcome, but encouraged. After a lively play session, all throughout the tasting room and back offices, we left and hit the road again.

Leaving Walla Walla we drove through amazing, huge, rolling hills of golden wheat like I have never seen. We drove through tiny little Washington towns with quaint downtowns and well-kept historic districts. It was inspiring to see the pride in the small town life.

Eventually, we crossed the Snake River (I think) into Idaho, which led us into the Clearwater National Forest, along the Lochsa River (I think) and over the Bitterroot Mountains. It is a beautiful, wild place and the river was so intriguing that we had to stop in order to try to lure Poppy into the shallow waters. She was hesitant, but tip-toed cautiously into the water to gingerly pull her ball from the river. 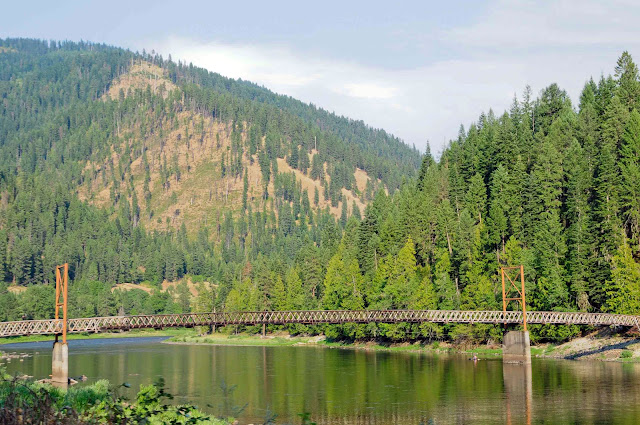 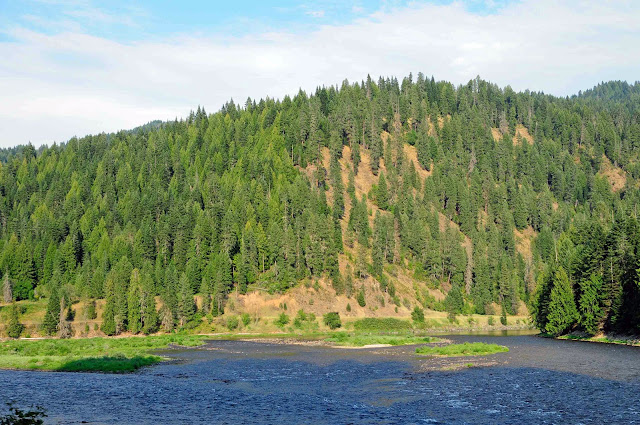 We reached the summit at Lolo Pass where we crossed into Montana as the daylight began to disappear. Eventually the mountains fell away and we were left in the wide, rolling Montana countryside south of Missoula. After a bit of a fiasco about the room we rented (more about this next time), involving a wrong address, a station wagon with missing windows and a Beware of Dog sign, we settled into our rented room (via Air B&B) and then went straight to downtown Missoula for a very late dinner.