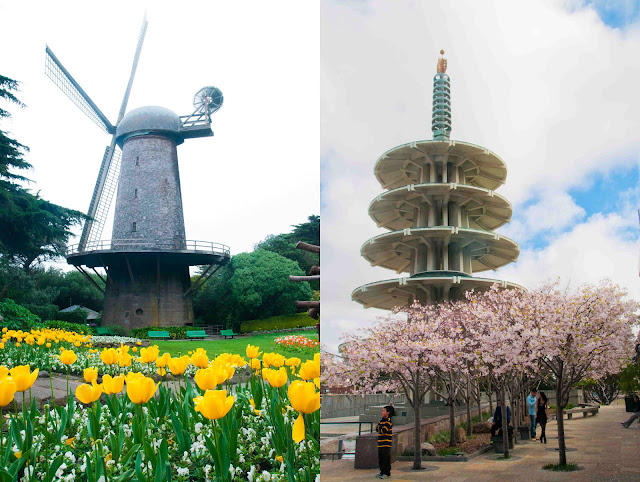 So, these aren't the best photographs I have ever taken, but what I like about them is they remind me of Two Springs in this world, one in Holland and one in Japan. Of course, they were both taken on the same day here in San Francisco. Its one of the things I love about this city. In the morning we (Mom and Beth) drove through Golden Gate Park, stopping to see the buffalo and ending up at the very end of the park, at the edge of the ocean, where the windmills live. I find it kind of odd that Dutch windmills, built by actual Dutchmen, are situation so close to the ocean, but here they are and it is spring so of course their are tulips blooming. There was a couple getting married in the grass, just the two of them, a photographer and the officiant.

We stuffed ourselves with Chinese dumplings, peashoots, vegetarian goose and green onion pancake at a great hole-in-the-wall Chinese place in Outer Richmond. Then we walked around Japantown, following the signs for the history walk describing the history of Japanese-Americans in San Francisco, their internment during World War II and how their place in the city never quite recovered. The cherry blossoms were blooming in the Peace Plaza and it seemed so fitting to Japanese culture, especially spring. Sakura.
Posted by Unknown