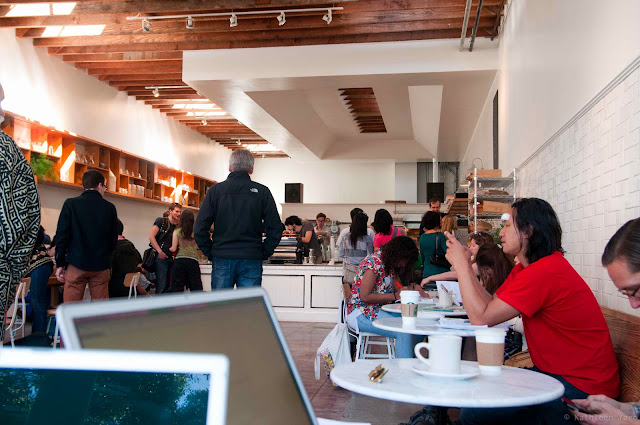 There is a new cafe in our neighborhood called, The Mill. They opened a month or so ago with lines out the door of people wanting their Four Barrel coffee and gourmet toast. That's right, I said gourmet toast. It is a very trendy place for the hipster set, the counter-culture cultural crowd. Yes, I am judging, because I am not sure if gourmet toast is really that special and we are tricked into thinking it is special because the cool people tell us this and we are too weak to know for ourselves. I like the toast, I think, but I am afraid too, that I might also just be weak minded. We went down there early afternoon and it was crowded, but with some stress, found a place to sit. Then, we had an unpleasant interaction with a foreign gentleman who did not speak loudly enough for anyone that did not have their ear up to his lips to hear him. He got annoyed when I kept asking him to repeat himself and became rude. We soon left for the coffee shop across the street. I discovered a newspaper article online on the third page of the Philadelphia Evening Ledger, the evening daily, obviously, from August 8, 1918 about the fire that killed my great-grandfather when he was twenty-nine. It included a picture of him in his fireman's uniform, the first image of him I have ever seen. It was riveting and eerie and wonderful, like a fuse that is suddenly no longer burnt out.
Posted by Unknown